I hope you all had a wonderful weekend!

This week, I’m writing to you from beautiful Cornwall, where I have my laptop propped on my lap while I work with the sound of the waves in the background. It’s a lovely setting – but very distracting! Luckily, I finished a book very recently and will soon be able to update you all with the dates of my forthcoming releases…eeeh! Exciting times ahead for DCI Ryan and Co…

However, in the meantime, I thought it might be nice to introduce you to another fellow writer in my Author Introduction series. This week, I’m delighted to welcome James Hartley to the blog. 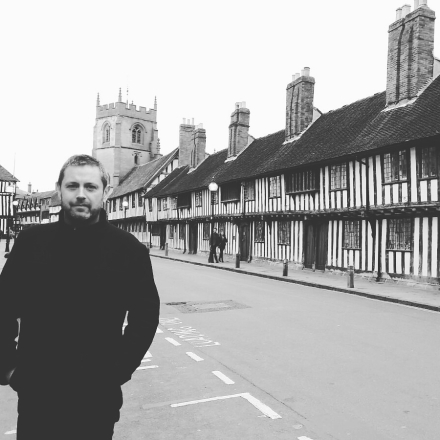 James was born on the Wirral on a rainy Thursday in May, 1973. He grew up in Singapore, Oman and Scotland and has lived and worked in Syria, Libya, Thailand, Germany and France. He now lives in Spain with his wife and two young children, where he teaches English and writes books. The Invisible Hand, based on the story of Macbeth, was published in February 2017 be Lodestone Books and Cold Fire, based on Romeo and Juliet, will be published on August 31st, this year. The books are stocked at the National and Globe theatres in London and in bookshops and schools all over the world. James also works closely with Shakespeare’s Schoolroom in Stratford-upon-Avon, where Shakespeare went to school.

Sounds like James has led a very interesting life, so far, and how wonderful to be so inspired by one of England’s literary greats. Let’s find out more…

My name´s James and I come from the Wirral, near Liverpool. I lived there until I was about seven and then moved to Singapore, where I lived for five years. I´ve also lived in Oman, Scotland, Thailand and now live in Madrid with my wife and two children, Carmen and Matty.

2. How about your latest book – what can readers look forward to when they pick it up?

My latest book is Cold Fire, which is based on Romeo and Juliet. It´s the second in my ‘Shakespeare´s Moon’ series which I thought was mainly for young adult readers but which has proved pretty popular with adults too. Each book is about children at a school who become mixed up in the plots of Shakespeare´s play. In this one we also learn a little bit about the background history of the school itself, especially about a young teacher from Stratford who turns up 400 years before the main action takes place.

3. Who is your hero in real life and in fiction?

I don´t really have any. They tend to change. Writers who´ve fought against the odds or have shown great dedication to get their books written and published always interest me. Normally my hero is whichever writer I´m reading and the hero of that book. I tend to become obsessed with whatever I´m reading at that moment.

4. Who are your three favourite writers – and why?

I´ll go for Enid Blyton, Eça de Queiroz and Iain Banks, not because I think they are the best writers – I think that´s largely subjective – but because their books helped me to keep going as a writer at different times of my life. Enid Blyton was a great friend during my childhood, right from the first books I ever read to the Secret Seven (I wasn´t a big Famous Fiver). The Enchanted Wood and Faraway Tree are great books, I think. Iain Banks´ The Wasp Factory turned up at a time when I was starting to get bogged down in worthy books and what I should and shouldn´t read, that difficult time when you´re moving from childish books to adult books (these days I think that age-group are much better catered for). The Wasp Factory was just shocking and bleak and dark and wonderful. Eça de Queiroz I bumped into in a bookshop in Portugal somewhere on holiday with my wife. I´d never heard of him but The Crime of Father Amaro sounded good, about a priest tempted by a love affair. What I thought was great about the book (especially in Margaret Jull Costa´s translation) is Eca´s humorous take on the town in general – the ironic, satirical eye was amazing. I love all his books and, just like the other two, I fully recognise all their faults too. Kind of makes me love them more.

5. When you’re not writing, what is your favourite way to spend your time?

With my wife and kids, watching football or doing sport.

6.What do you consider to be your greatest achievement?

Probably the kids. Finding a woman I really love to live with me and put up with me, too.

7.What was your favourite book as a child?

I used to love annuals. Comic annuals. I had one called Action which had a shark called Hook Jaw in it. I used to love that. The Secret Seven books were the first books I really cherished, put in order, had near me. They felt like an extension of me.

8.Have you read any books recently that have really captured your imagination?

Lots. I tend to steer clear of books that don´t. The Eleanor Oliphant one was good. I´ve also been reading a lot of horror books for the first time in my life and they´re great fun. Stephen King is a bit long-winded but some of the situations he gets people in are great. I´m reading Cujo now about a rabid dog and almost half of the book is a mother stuck in the car with her son in the heat for days on end while the big dog sits outside, occasionally attacking, most of the time waiting or hiding and it´s just brilliant.

9.If the Prime Minister knocked at your front door and asked to borrow a book, which one would you recommend they read?

Meditations, Marcus Aurelius. I teach English in Madrid and it was recommended to me by a very intelligent lady doctor who was dying of cancer (she´d survived it twice but the third time it got her). She was shocked I´d never read it and I expected it to be dry and tedious but I think it´s an amazing book. Proper bedside table fodder, next to Cujo.

10. Finally, if you could be any character from a movie, which would it be?

For a long time it would have been John McClane in Die Hard, I think, awful as that is, but I was always more of a wish-I-was-a-rock-star daydreamer. Recently I´ve thought being a rockstar must be pretty awful, though. Wearing sunglasses inside and dancing in leather for a huge crowd of mostly men. I always wanted to be a writer, so I´m happy with my lot.

…Thanks, James! I completely agree with your comment about the ‘best’ writers being a matter of subjective opinion; some of my favourites include Russian literary greats as well as commercial romantic suspense writers, without reference to who I ‘should’ or ‘shouldn’t’ consider to be amongst the best. It’s all relative! I’d never heard of Eça de Queiroz until reading your answers to my questionnaire, so I’ll definitely take up your recommendation sometime soon.

For now, I’m wishing you every success with your new book and wishing everybody reading this a happy and successful week ahead!