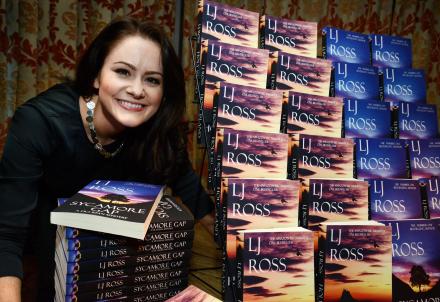 After a ridiculously hectic month, I have finally found the time to sit and write to you all again! How are we all doing? Looking forward to the festive season? As usual, I am likely to leave present buying until the final hour and, even then, to panic buy all manner of useless gifts which people will politely thank me for. That’s true friendship combined with a hate of large-scale shopping…

Now, onto all things writing related. 21st November was the date of my first ever book launch party! Hurrah! I hear you cry. Well, I must preface this event by telling you that, as an natural introvert, this sort of thing scares the living daylights out of me. Socialising is an effort at the best of times and the thought of talking about myself for protracted periods of time is nauseating. I’m honest enough to know that I’m not that interesting. But, you’d be surprised how long some writers can talk about themselves and their work – inevitably, in these scenarios, heads will eventually swivel towards me and I find myself muttering something along the lines of, “Umm, yes, I write stories.”

Yet, despite these misgivings, I thought it would be nice to celebrate the release of Sycamore Gap in paperback by throwing an informal book party. At the very least, I could knock back a few glasses of vino tinto, thank my nearest and dearest and congratulate myself on surviving nearly a year in this new industry. And, what a year it has been: two books, both #1 bestsellers and one of them a UK #1 bestseller. Mind boggling, for a woman who thought she would have at least another 5-10 years of artsy struggle ahead of her, tapping away to the sounds of the Murder, She Wrote theme tune.

I didn’t know what to expect of a book party; I deliberately chose a popular  wine bar in Newcastle, well known to locals, rather than a library or otherwise daytime scenario. We hired a private area, set up a stand with plenty of books, put on food, drink and fabulous cakes in the shape of the Sycamore Gap book cover made by the fair hands of two of my good friends. Then, waited for people to come. To my surprise, LOADS of people came (and not all of them family)! We chatted, I gave away a bunch of signed books (goodwill goes far in this business, I have found) and had a lovely time getting to know some of my readers. Thanks to all of them for coming. Extra thanks go out to Roger Clegg, the man behind the photograph on the cover of the book, who is himself a well-known photographer whose image was on display at the British Museum. If you’re interested, you can find some of his work here:Roger Clegg Photography. All-in-all, what a brilliant night!

Voluntarily placing yourself outside of your natural comfort zone isn’t always easy, but sometimes it’s a useful exercise – not only for your business, but for your soul. That goes for writing in general: those who do it often find it a solitary life, but one suited to their natural temperament. Unfortunately, most of the peripheral business of self-publishing (or traditional publishing, for that matter) requires high levels of social interaction nowadays, whether in person or via social media, and at the very least will require you to actually put your work out into the open. All terrifying things for those of us who wince at the thought of selfies and self promotion. My advice? Power through the pain!! Think of it as a psychological exercise, flooding your senses with that which does not come naturally, until it feels a bit more natural! It will be worth it, in the end.

I had a bit of early practice in feigning more of an extrovert nature, when I did a bit of theatre as a teenager, then regular advocacy as a lawyer. A stage and a courtroom are not first choices for one who would rather curl up with a good book, but in both cases I viewed the setting as a means to an end. After all, how could I help a client, if I could not speak competently on their behalf? It is not so different in the world of writing: how can readers understand the motivation behind your characters and your writing, if they know nothing about the source?

6 thoughts on “Launch parties and the “comfort zone””